Grading of nanocellulose using a centrifuge

Nanocellulose is a nanomaterial that is garnering attention recently, and it is obtained from cellulose or a cellulose derivative through wet-type high-pressure dispersion and pulverization or wet-tye grinding and pulverization. We will introduce the results of particle size measurements made using a Laser diffraction / scattering method particle size distribution measurement apparatus LS 13 320 to measure nanocellulose that was obtained by performing wet-type high-pressure dispersion and pulverization on low-substituted hydroxy propylcellulose, which is one type of cellulose derivative, as well as the results for separation of only the component to be measured in the nanosize region through centrifugation.

A Shin-Etsu Chemical Co., Ltd. L-HPC (low-substituted hydroxy propylcellulose) LODICEL LDC-H 2 wt% dispersion was passed through a Sugino Machine Ltd. Starburst test apparatus 10 times at a pressure of 150 MPa for use as the dispersion in the experiment. 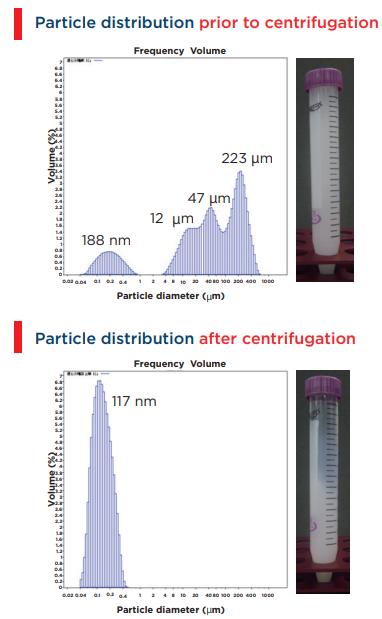 The results obtained by measuring the nanoized dispersion using LS 13 320 are shown.
At the same time as the detection of the nanosize particles generated as a result of the nanoization processing, we also detected microsize particles that remained without undergoing nanoization.
These results indicate that, even after nanoization processing, many particles remaining at the microsize will be present.
By using LS 13 320, it will be possible to perform a quantitative comparative study by simultaneously measuring micro and nanosize particles